The Truth About Currency Correlation in Forex 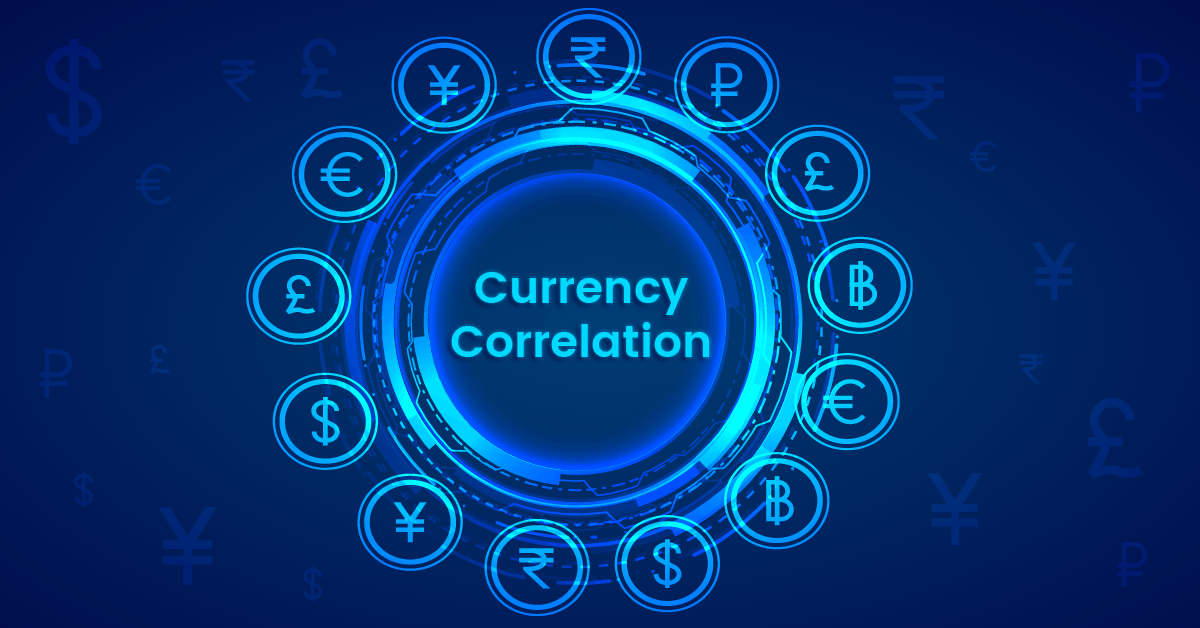 For all traders out there, did you experience the change in currency correlation in the forex market this year? Did you get your fingers burned? Yes, in forex, every revelation comes with a price. If you’re a newbie, let’s take a hard rock out of your Forex foundation and replace it with some new wisdom today.

What is Currency Correlation in forex?

When one currency pair goes up, the other follows it up by going in the same direction or the opposite. It is called currency correlation.

For instance, consider EUR/USD and GBP/USD. Since their movements are precisely identical, they have a positive correlation. Whereas, if you compare the EUR/USD with the USD/CAD, you can see a slight negative correlation.

Owning 1 lot of EUR/USD and 1 lot of GBP/USD is equivalent to owning 2 lots of EUR/USD as both will either hit the target or stop loss in tandem. So, traders have to be aware of the correlated currency pairs as they could significantly increase the risk or be used as a wise hedging tool.

The reason behind currency correlation in Forex

There are three primary reasons for currency correlation.

The currencies are clubbed as pairs. So the same currency appears in multiple pairs. When there is a spike in demand for a currency, it happens across the board. And traders get hold of it against every pair.

Some economies are interdependent. Generally, this happens with neighboring countries, say, Australia and New Zealand, the US, and Canada. So, when one makes a move, traders naturally take a speculative position on the other to follow it up.

When investors worry that the financial markets are at risk, they embrace safe-haven assets like the USD, JPY, and CHF. But when the market is at its best, they take the extra mile of risk and acquire EUR, GBP, and AUD.

How to measure the currency correlation of forex pairs?

The spreadsheet has an inbuilt function (=CORREL). You can use it to find the correlation of any asset class. 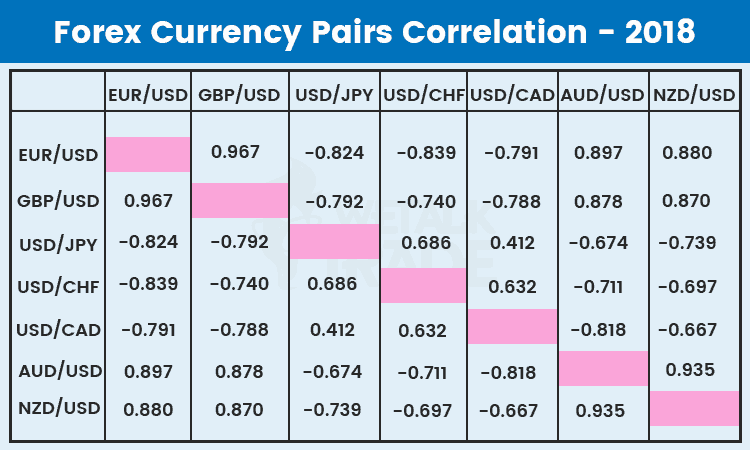 Well, traders believed this correlation was a fixed affair in the forex market until that time. And it was an easy deal back then. But here is the twist in the tale:

The Currency Correlations are not stone wall carvings

The year 2019 had a significant change in store for us, traders. Some divorces and marriages took place, which could have been shocking even to the fans of Game of Thrones.

When one went down, the other followed it down the hill.

It was a year-long downtrend for both pairs, making lows after lows.

And they were lame-duck candidates all through the summer.

Well, this one was a bouncer. It defied the thumb rule of investing—gold goes down when the dollar goes up—and both went up. Hardly anyone had time to realize the inversion in the correlation, but a significant move happened.

Hence, investors played catch up, which resulted in the largest bull market in the bullion market.

The yellow metal was too costly for non-Americans, yet the buying frenzy didn’t freeze. It only proved that investors were paranoid about the economy.

These currency pairs had a strong negative correlation previously.

However, in 2019, their correlation changed to positive.

The US Dollar in both the counters witnessed a change in demand against AUD and JPY drastically, which could have caught many traders off-guard.

So the bottom line is that the currency correlation of forex pairs is not a stone wall carving.

It can change anytime due to the change in economic dynamics.

Let’s analyze the changes that happened this year and, in turn, expect what the future has in store for us.

What triggered the currency correlation change?

US-China: Fire in the Hole!

The trade war disrupted the forex movements and correlation, all through the year.

Economics took a backseat, and politics became the reckless driver of the market. Hence, traders had glued themselves to Trump’s Twitter handle and Chinese newspapers rather than the charts.

Each time a tariff was imposed by either of the countries, the market ran for cover. And the cover was obviously provided by gold, the US dollar, and the Japanese yen. So traders bought piled up all three irrespective of their correlation.

Amid these roller coaster rides in the market, one indicator outperformed the custom indicators. Care to know?

Why did the market choose these 3 assets?

Gold is a safe haven for the investing community. Whenever a mishap happened, the market generally braced for it. So it wasn’t a howler that traders piled up gold during uncertain times. Want to handle uncertainty like a pro? Here are 4 amazing tips!)

But the uptick in the USD, the archrival of gold, made many traders go bonkers. And here are the reasons for its change in currency correlation with its peers.

#TwoThe tariff imposed by the US filled its coffers, and hence, the trade deficit narrowed a bit, which was a good sign for the short-term.

#ThreeA trade war between the heavyweights—US and China—made recession an inevitability for many of the ailing economies, and so the investing community didn’t have much choice to put their money to work. So, they parked their money in the one they felt comfortable with.

#Four: The US central bank was the lone hawk among the crowded doves. As the interest rate rose, the currency also naturally spiked.

Japanese Yen had been the Forex community’s go-to asset during the low-interest regime, historically.

Since the central banks around the world were cutting interest rates to counter the menacing effect of the trade war, investors took shelter in the Y-shaped hut.

Trade war or not, JPY would have outperformed the market since most central banks were dovish throughout the year.

Are you confused about how to overcome these economic mumbo-jumbos technically? Here is the next-gen indicator that could ease your worries.

Is trade war potent enough to change the course of the economy?

The west has a developed economy. Since they are saturated, their growth potential is low.

However, it is the east that has developing nations and a large mass of consumers—say, China and India. They have been the most significant contributors to world GDP (Gross Domestic Product) in the past decade.

The trade war crippled China as its exports lost their glittering low-cost factor. The repercussions were acute, and it started reflecting in their investment and production numbers.

As a result, the world’s GDP took a dent. The future forecasts for the GDP were also pessimistic.

Ergo, the investing community was right to panic.

US and Eurozone Trade war

Well, this one is still in the foreplay period. The US has been teasing the Eurozone with tough rhetoric on the trade balance. Though it hasn’t reached the front page yet, investors are wary that it might happen soon.

And it could have a far more catastrophic effect than the US-China trade war. The US exported 574.5 billion worth of goods to Europe, whereas only 179.2 goods to China, in 2018, according to data from US Trade Representative. Hence, a retaliation tariff from Eurozone could make the US economy bleed as well, which didn’t happen so during the Chinese fight back.

And this blood bath could unlock a vicious chain of events in the currency correlation, which is hard to predict now.

The Euro and the British pound have been identical twins in the past.

It is because of their closely related economies.

However, the Brexit divorce could change their economic behavior as well. A shift in trade and economic policies could have a direct impact on foreign capital inflows to Britain. And the working conditions and wages of laborers will have a direct say on inflation, which is a significant concern for any central bank.

So the details lie in the fine print of the deal.

If Britain stalks and follows the euro like a scorned ex-lover in its policies, owing to the deal, then their forex correlation wouldn’t see a tweak.

On the flip side, if they part ways in diagonally opposite directions and Britain retains its free will to sign deals with other countries, then their correlation could falter as well.

MUST READ  Create Your Own Trading System

So, don’t get ambushed by anticipating a parallel move after the exit! We said it here first!

The currency correlation is not a fixed affair in the forex market.

It’s like a marriage; sometimes, the couple tends to be life long partners while some divorce.

So, we advise you to check the correlation using the formula or with the help of an excel sheet periodically, say monthly or weekly.

Make your trading decision based on facts rather than assumptions or hopes.

Or trade the currency to the merit of their charts rather than merely trusting on the correlation. Here are some tips to create an effective trading plan for further reading.

What is the Role of Volume in Forex Trading?

Three types of self-talk that can help Forex traders

Types of Candlestick in Forex 2023

What Are Pips in Forex Trading and What Is Their Value?