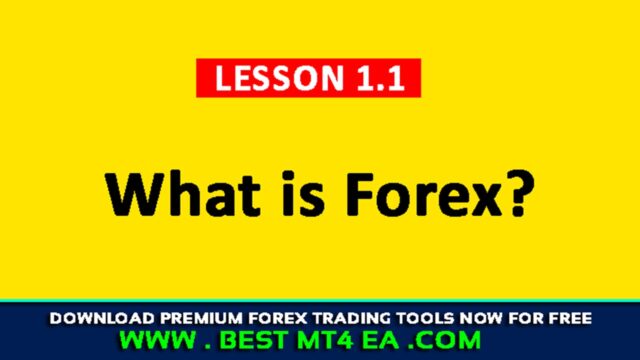 What is forex? Quite simply, it’s the global market that allows the exchange of one currency for another.

If you’ve ever traveled to another country, you usually had to find a currency exchange booth at the airport, and then exchange the money you have in your wallet into the currency of the country you are visiting.

You go up to the counter and notice a screen displaying different exchange rates for different currencies.

When you do this, you’ve essentially participated in the forex market! You’ve exchanged one currency for another.

Before you fly back home, you stop by the currency exchange booth to exchange the yen that you miraculously have left over (Tokyo is expensive!) and notice the exchange rates have changed.

It’s these changes in the exchanges rates that allow you to make money in the foreign exchange market.

The foreign exchange market, which is usually known as “forex” or “FX,” is the largest financial market in the world.

Compared to the “measly” $22.4 billion per day volume of the New York Stock Exchange (NYSE), the foreign exchange market looks absolutely ginormous with its $5 TRILLION a day trade volume.

That’s trillion with a “t”.

The largest stock market in the world, the New York Stock Exchange (NYSE), trades a volume of about $22.4 billion each day. If we used a monster to represent the NYSE, it would look like this…

Looks intimidating. Some may even find it sexy.

You hear about the NYSE in the news every day… on CNBC… on Bloomberg…on BBC… heck, you even probably hear about it at your local gym. “The NYSE is up today, blah, blah”.

When people talk about the “market”, they usually mean the stock market. So the NYSE sounds big, it’s loud and likes to make a lot of noise.

But if you actually compare it to the forex market, it would look like this…

Oooh, the NYSE looks so puny compared to the forex market! It doesn’t stand a chance!

The currency market is over 200 times BIGGER! It is HUGE! But hold your horses, there’s a catch!

That huge $5 trillion number covers the entire global foreign exchange market, BUT daily trading volume from retail traders (that’s us) make up between 5-6% of overall volume, or between $300-400 billion.

So you see, the forex market is definitely huge, but not as huge as the others would like you to believe. We don’t like to exaggerate. We just keepin’ it real.

Aside from its size, the market also rarely closes!

The forex market is open 24 hours a day and 5 days a week, only closing down during the weekend. (What a bunch of slackers!)

So unlike the stock or bond markets, the forex market does NOT close at the end of each business day.

Instead, trading just shifts to different financial centers around the world.

The day starts when traders wake up in Sydney then moves to Tokyo, London, Frankfurt and finally, New York, before trading starts all over again in Sydney!

What Is Traded In Forex?

What is traded in forex?

The simple answer is MONEY.

Because you’re not buying anything physical, forex trading can be confusing.

Think of buying a currency as buying a share in a particular country, kinda like buying stocks of a company. The price of the currency is usually a direct reflection of the market’s opinion on the current and future health of its respective economy.

In forex trading, when you buy, say, the Japanese yen, you are basically buying a “share” in the Japanese economy.

You are betting that the Japanese economy is doing well, and will even get better as time goes. Once you sell those “shares” back to the market, hopefully, you will end up with a profit.

In general, the exchange rate of a currency versus other currencies is a reflection of the condition of that country’s economy, compared to other countries’ economies. By the time you graduate from this School of Pipsology, you’ll be eager to start working with currencies.

While there are potentially lots of currencies you can trade, as a new trader, you will probably start trading with the “major currencies.”

Currency symbols always have three letters, where the first two letters identify the name of the country and the third letter identifies the name of that country’s currency.

The currencies included in the chart above are called the “majors” because they are the most widely traded ones.

We’d also like to let you know that “buck” isn’t the only nickname for USD.

Instead, you could say, “Yo, I gotta bounce! Gotta make them benjis son!”

Fun fact: Did you also know that in Peru, a nickname for the U.S. dollar is Coco, which is a pet name for Jorge (George in Spanish), a reference to the portrait of George Washington on the $1 note?

They call me Coco yo!

Forex trading is the simultaneous buying of one currency and selling another. Currencies are traded through a broker or dealer, and are traded in pairs.

For example the euro and the U.S. dollar (EUR/USD) or the British pound and the Japanese yen (GBP/JPY).When you trade in the forex market, you buy or sell in currency pairs.

Imagine each currency pair constantly in a “tug of war” with each currency on its own side of the rope. Exchange rates fluctuate based on which currency is stronger at the moment.

The currency pairs listed below are considered the “majors.”

These pairs all contain the U.S. dollar (USD) on one side and are the most frequently traded.

The majors are the most liquid and widely traded currency pairs in the world.

Currency pairs that don’t contain the U.S. dollar (USD) are known as cross-currency pairs or simply as the “crosses.”

Major crosses are also known as “minors.” The most actively traded crosses are derived from the three major non-USD currencies: EUR, JPY, and GBP.

No, exotic pairs are not exotic belly dancers who happen to be twins. Exotic currency pairs are made up of one major currency paired with the currency of an emerging economy, such as Brazil, Mexico or Hungary.

The chart below contains a few examples of exotic currency pairs. Wanna take a shot at guessing what those other currency symbols stand for?

Depending on your forex broker, you may see the following exotic currency pairs so it’s good to know what they are.

Keep in mind that these pairs aren’t as heavily traded as the “majors” or “crosses,” so the transaction costs associated with trading these pairs are usually bigger.

It’s not unusual to see spreads that are two or three times bigger than that of EUR/USD or USD/JPY. So if you want to trade exotics currency pairs, remember to factor this in your decision.

Unlike other financial markets like the New York Stock Exchange (NYSE) or London Stock Exchange (LSE), the forex market has neither a physical location nor a central exchange.

The forex market is considered an Over-the-Counter (OTC), or “interbank” market due to the fact that the entire market is run electronically, within a network of banks, continuously over a 24-hour period. This means that the spot forex market is spread all over the globe with no central location. Trades can take place anywhere as long as you have an Internet connection!

The forex OTC market is by far the biggest and most popular financial market in the world, traded globally by a large number of individuals and organizations.

In an OTC market, participants determine who they want to trade with depending on trading conditions, the attractiveness of prices, and reputation of the trading counterparty.

The chart below shows the seven most actively traded currencies.

*Because two currencies are involved in each transaction, the sum of the percentage shares of individual currencies totals 200% instead of 100%

The dollar is the most traded currency, taking up 84.9% of all transactions.

As you can see, most of the major currencies are hogging the top spots on this list!

The Dollar is King in the Forex Market

You’ve probably noticed how often we keep mentioning the U.S. dollar (USD). If the USD is one-half of every major currency pair, and the majors comprise 75% of all trades, then it’s a must to pay attention to the U.S. dollar. The USD is king!

In fact, according to the International Monetary Fund (IMF), the U.S. dollar comprises roughly 64% of the world’s official foreign exchange reserves! Because almost every investor, business, and central bank own it, they pay attention to the U.S. dollar.

There are also other significant reasons why the U.S. dollar plays a central role in the forex market:

Speculation in the Forex Market

One important thing to note about the forex market is that while commercial and financial transactions are part of the trading volume, most currency trading is based on speculation.

In other words, most of the trading volume comes from traders that buy and sell based on intraday price movements.

The trading volume brought about by speculators is estimated to be more than 90%!

The scale of the forex market means that liquidity – the amount of buying and selling volume happening at any given time – is extremely high.

This makes it very easy for anyone to buy and sell currencies.

From the perspective of a trader, liquidity is very important because it determines how easily price can change over a given time period.

While the forex market is relatively very liquid, the market depth could change depending on the currency pair and time of day.

In our forex trading sessions part of the school, we’ll tell you how the time of your trades can affect the pair you’re trading.

The Different Ways To Trade Forex

Because forex is so awesome, traders came up with a number of different ways to invest or speculate in currencies.

Among these, the most popular ones are spot forex, currency futures, currency options, and currency exchange-traded funds (or ETFs).

Futures are contracts to buy or sell a certain asset at a specified price on a future date (That’s why they’re called futures!). FX futures were created by the Chicago Mercantile Exchange (CME) way back in 1972, when bell bottoms and platform boots were still in style.

Since futures contracts are standardized and traded on a centralized exchange, the market is very transparent and well-regulated. This means that price and transaction information are readily available.

Just like futures, options are also traded on an exchange, such as the Chicago Mercantile Exchange (CME), the International Securities Exchange (ISE), or the Philadelphia Stock Exchange (PHLX).

However, the disadvantage in trading FX options is that market hours are limited for certain options and the liquidity is not nearly as great as the futures or spot market.

Exchange-traded funds or ETFs are the youngest members of the forex world.

ETFs are created and managed by financial institutions who buy and hold currencies in a fund. They then offer shares of the fund to the public on an exchange allowing you to buy and trade these shares just like stocks.

Like currency options, the limitation in trading currency ETFs is that the market isn’t open 24 hours. Also, ETFs are subject to trading commissions and other transaction costs.

In the spot market, currencies are traded immediately or “on the spot,” using the current market price. What’s awesome about this market is its simplicity, liquidity, tight spreads, and round-the-clock operations.

It’s very easy to participate in this market since accounts can be opened with as little as $50! (Not that we suggest you do) – you’ll learn why in our Capitalization lesson!

Aside from that, most forex brokers usually provide charts, news, and research for free.

IF YOU DON'T FIND A WAY TO MAKE MONEY WHILE YOU SLEEP, YOU WILL WORK UNTIL YOU DIE.