The Wolfe wave chart pattern is a powerful formation that is often seen near terminal points of a price trend. As such, it is considered a countertrend trade set up. The Wolfe wave pattern has been shown to be a reliable set up that technicians should study and be aware of. This article will highlight the most important aspects of the Wolfe wave pattern and some of the best practices for applying in the market.

A Wolfe wave is a unique pattern that appears in the price series. A Wolfe wave consists of five waves within the context of a bullish or bearish market trend and which has a very symmetrical shape. The pattern is most often found within an uptrending or downtrending channel formation.

Although the pattern does appear within a range bound market scenario, the best Wolfe wave patterns will display some level of trending behavior within the price action. Technical traders can use the pattern to help time their entries more effectively. There are some very specific Wolfe wave rules that must be met in order for a proper classification of the structure.

The concept of Wolfe waves was studied by Bill Wolfe who discovered and presented the pattern to the technical analysis trading community. Wolfe wave patterns occur across all time frames within freely traded liquid financial markets.

When a trader can correctly label a Wolfe wave pattern, they will be able to execute a buy or sell set up at a high probability reversal point and arrive at a precise target point for the trade as well. As such, Wolfe wave formations can be an excellent addition to any technicians trading arsenal. Let’s now take a closer look at what the Wolfe wave pattern appears like.

The bearish Wolfe wave pattern generates a sell signal near the terminal point of wave five, after the 1-3 trend line has been breached to the upside. Subsequently, price is expected to move lower and find support near the 1-4 trendline.

Wolfe waves will generally form within parallel channels or equidistant channels. That is to say that the Wolfe wave pattern will be seen as forming within two trendlines that are relatively parallel to each other. Within the context of a Bearish Wolfe wave pattern, there will be five price legs of relatively equivalent length, and which appear to display symmetry.

In the illustration below you can see an example of the bullish Wolfe wave pattern. 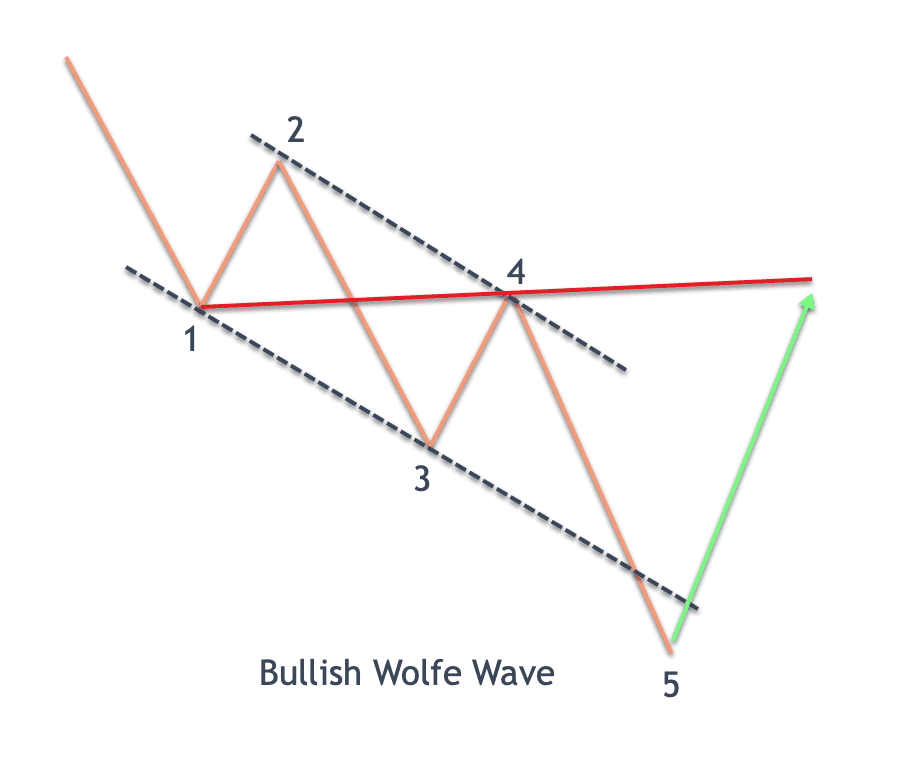 The bullish Wolfe wave structure begins at leg one which moves lower. At some point wave one will create a swing low, and prices will begin to move higher in wave two. After wave two completes, wave three will begin to move lower and terminate below the start of wave one, followed by wave 4 which will move higher and create a swing high below wave 2.

The bullish Wolfe wave pattern is a contrarian trading set up, wherein we want to trade counter to the prevailing down trending market environment in expectation of an upside reversal. The bullish Wolfe wave structure provides a target point which is calculated using the 1-4 trendline. As prices approach this level, we would expect to find resistance, thus providing a good opportunity to exit our long position.

MUST READ  A COMPLETE GUIDE TO HEDGING FOREX 2023 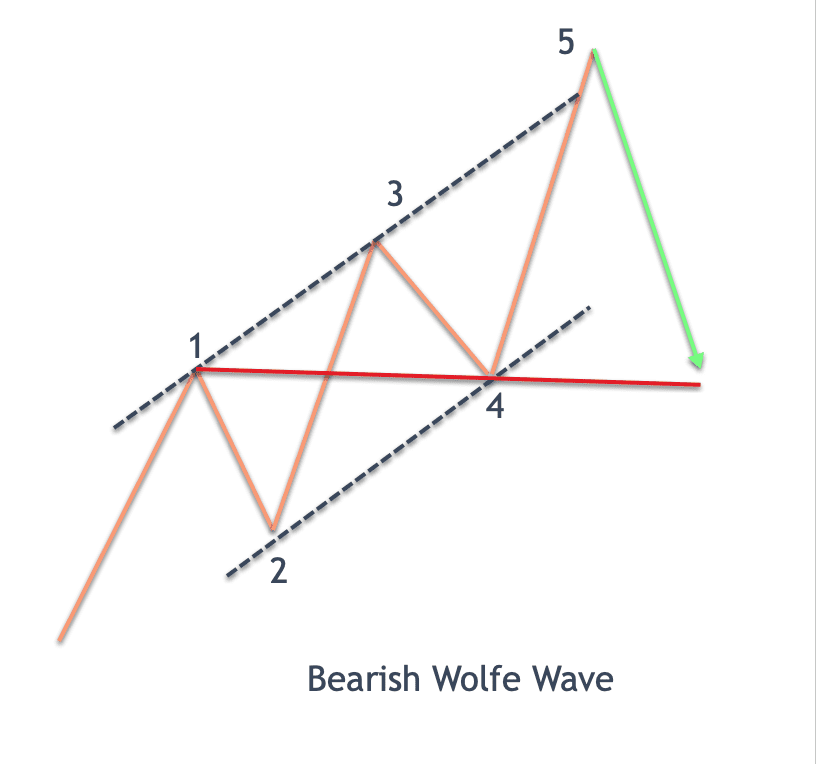 The actual sell entry signal occurs when the price moves back into the channel after this upper trendline penetration. This price rejection back into the channel confirms the Wolfe wave pattern. As you may have noticed, the Bearish Wolfe wave pattern is a countertrend trade set up that seeks to fade an up trending market condition at a high probability turning point. Upon entry into the Bearish Wolfe wave set up, the target can also be calculated. To calculate the anticipated price move, you would draw a trendline connecting the end of wave 1 and the end of wave 4 and project forward. When the price action nears this 1-4 trendline, we can expect the price to find support once again.

Let’s now build a full trading strategy using the Wolfe wave pattern set up. This will be a pure price action based strategy, meaning that we will not make use of any other technical indicators or oscillators, but rather focus purely on the price structure that creates the Wolfe wave formation.

So below are the rules for entering into a long trade set up.

And here are the rules for entering into a short trade set up.

Let’s now refer to a price chart to illustrate the Wolfe wave trading system outlined in the previous section. On the price chart below, you will see a Wolfe wave formation in the Forex market. Specifically, this example illustrates a bullish Wolfe wave set up in the US Dollar to Canadian Dollar currency pair using the 240 minute timeframe.

MUST READ  What is the Role of Volume in Forex Trading?

Let’s begin dissecting this potential bullish Wolfe wave pattern and see how we would go about trading it based on our specified rules. First and foremost, we want to make sure that the price for the USDCAD is trending lower. This is obviously the case as we take a glance at the price chart. As the bearish trend progresses, we would have recognized at some point that a potential bullish Wolfe wave pattern may be emerging.

We would label each of the legs within the structure starting with wave one. As we moved into the early parts of wave five, we would’ve been able to draw two trendlines. The first would be the 1-3 trend line connecting the swing lows at wave one and wave three.

Additionally, we would draw the second trendline connecting the swing highs at wave two and wave four. Once we’ve done this, we can refer back to the two trendlines and confirm that they are relatively parallel.

During the latter part of wave five, we can see that the prices breached the 1-3 trendline but was quickly rejected as prices moved back higher into the price channel. Note the first green bar that closes within the price channel. This would have been our signal to go long the USDCAD currency pair.

Once the buy order was executed and we were positioned to the long side, we would immediately place a stop loss order to protect ourselves from any adverse price movements. The stoploss would be placed just below the swing low of wave five as can be seen by the orange line noted as, Stop.

From here we will want to mark the potential exit point for this trade. Remember to do this, we would plot a trendline connecting waves one and four and project that line forward. This is illustrated using the dark redline within the price chart.

Notice how prices move into this target area penetrating ever so slightly to the upside before finding resistance and drawing prices lower. Luckily for us we would have exited the trade at an optimal time with a healthy profit.

Now let’s look at a second example of the Wolfe wave pattern strategy. This time will be highlighting a bearish Wolfe wave structure. Below you’ll find the chart for the US Dollar to Japanese Yen currency pair shown on the 240 minute timeframe.

Starting from the far left of the price chart we can see that the price action was moving higher thus fulfilling the initial component for the bearish Wolfe wave strategy. As prices progressed higher, we can see a sort of stairstep price movement which comprises waves 1 to 5.

More specifically we can see that waves one and three are rising in the direction of the overall trend, and waves two and four move counter to the trend, retracing a portion of waves one and three respectively. As prices moved higher in the initial stages of wave five, we would’ve been able to recognize a potential bearish Wolfe set up progressing.

At this point we would wait to see if the price action in wave five extends beyond the 1-3 trendline providing us a potential shorting opportunity. As we can see, wave five did in fact extend beyond the 1-3 trendline and began to consolidate in that area. But soon after, prices were rejected to the downside, providing us confirmation of the bearish Wolfe wave formation.

A market order to sell the USDJPY currency pair would’ve been placed at the first down close into the parallel price channel. You can note where this occurs by referencing the blue arrow noted as, Sell. Once our sell short order has been initiated in the market, we can turn our attention to the stoploss.

As per our rules, we will place a stop loss just above the swing high of wave five. The trade exit would be projected using the 1-4 trendline. We would connect the swing high at wave one with the swing low at wave four and project a trendline forward. Notice how prices moved into that target area before reversing back to the upside.

Having said that the best most reliable Wolfe wave patterns to trade are those that occur on the four hour charts and above. This is where technical chartists should focus their energies when scanning for high probability Wolfe wave patterns. Traders can look for these patterns manually on the price chart or find a Wolfe wave indicator for this purpose.

How to Immediately Become a Successful Trader

A COMPLETE GUIDE TO HEDGING FOREX 2023

How to hedge forex trades 2023